1. Christopher Columbus tried to settle in the “New World” several times before getting it right. The first and second attempts, La Navidad (in Haiti) and La Isabela (near Puerto Plata), were plagued with fire and disease. It wasn’t until the third time, on an opposite coast of Hispaniola, that he and his men perfected the recipe.

To this day, Santo Domingo is still a lively, thriving metropolis and acts as both the capital city of the Dominican Republic and the largest city in the Caribbean by population. But it’s also so much more: The sounds of merengue, bachata and salsa drifting from a Malecón nightclub or the smells of conch gratinée wafting from a romantic café in Zona Colonial. Due to its history, it’s also a city of superlatives: where you’ll find the first church (Catedral Primada de América), the first stronghold (Fortaleza Ozama) and the oldest street (Calle Las Damas) in the Americas. This is the real Santo Domingo.

2. Despite its location on the Caribbean Sea, Santo Domingo is far from a beach town. Instead, you should expect to spend some time at historically significant sites like the Catedral Primada de América or the Fortaleza Ozama. Make sure to allot an hour or two for the architecturally significant Columbus Lighthouse. Meanwhile, night owls should check out the city’s vibrant nightlife — some say the Malecón’s nightclubs and late night entertainment are the best in the Caribbean.

3. There’s plenty of top-notch shopping From amber and larimar (Dominican turquoise) jewelry, to hand-wrapped cigars, the DR as a whole is known for its high-quality souvenirs. You’ll find stands and shops all along the Malecón and within the Zona Colonial.

4. The nightlife is excellent Even the hotel clubs are pretty lively in Santo Domingo. And you’ll also find an enviable assortment of bars, dance clubs and casinos along the Malecón.

5. Béisbol is the sport of choice Several major league baseball players got their “swinging” start in this city: The Pittsburgh Pirates’ Pedro Alvarez, the Colorado Rockies’ Cristhian Adames and the Boston Red Sox’s David Ortiz, to name a few. Go root for tomorrow’s MLB pros at the Estadio Quisqueya.

6. A visit to Santo Domingo wouldn’t be complete without a stop at the Zona Colonial. This UNESCO World Heritage Site was founded in 1498 and boasts more than 300 historical sites within its parameters.

For a stark contrast from Santo Domingo’s Zona Colonial, take in the sites and entertainment of the newer Malecon. If you happen to be wandering around Santo Domingo’s Malecon, you’ll likely spot the area’s famed El Obelisco. Originally built in 1936 by the country’s notorious dictator, Rafael Trujillo, this monument now depicts anti-Trujillo murals and honors anti-dictator campaigners assassinated in 1960.

8.Also known as the Catedral Santa María La Menor, this 16th century church used to house the purported remains of Christopher Columbus. They were later moved across town to the Columbus Lighthouse. 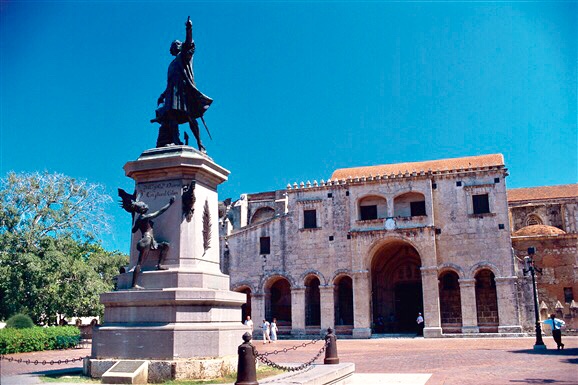 9. Christopher Columbus’ influence on Santo Domingo is certainly felt in this central square, which honors the historic figure through its name and its statue of the late explorer.

10. The beautiful Alcázar de Colón was once the home of Diego Colón, Christopher Columbus’ son and former viceroy of what is now the Dominican Republic 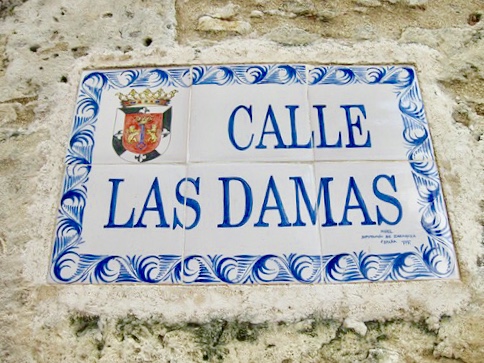 11. The first street created in the city’s Zona Colonial, Calle Las Damas is known for its decorative tiles and historic charm.12. This Zona Colonial ruin isn’t much to look at during the day; swing by in the evening instead when it’s perfectly illuminated for photo ops.

13. When this controversially designed lighthouse is lit, the beams can be seen from Puerto Rico. 14. Although Santo Domingo is known more for its historic architecture than its beaches, several are easily accessible from the city. One such beach is Juan Dolio, which is located about 38 miles west of the capital.

The best time to visit Santo Domingo is between November and March. That’s when this city experiences its best beach weather, even if there aren’t many great beaches to enjoy it on. April to July is also a pleasant time to visit, but you should avoid this area at all costs during the hurricane season, which runs from August to October. Whenever you visit, you’ll find the hotel rates are agreeable; even the best properties have rooms available for less than $150 a night.