How many of you readers have visited Albania?

I love to promote my beautiful country and also to “hunt” for other travel blogs about Albania. In this way I discover new blogs, new and very interesting travelers, because we are used with the ones who go to the most typical places to visit in Europe, not like Albania, which is not yet viewed massively like a first choice touristic destination…Also, I discover their point of view and I have to say I have never been disappointed from what I have found.

My last “discovery” is a very brave and interesting traveler, Heart My Backpack and her post of 2015 about Albanian Riviera. I contacted her and got the permission to share this post. I hope she doesn’t mind that I will also add some other pictures in this post.
THE ULTIMATE TRAVEL GUIDE TO A BUDGET BEACH HOLIDAY IN ALBANIA
Want a budget beach holiday in Europe? Travel to Albanian Riviera with this guide and you’ll be all set, because Albanian beaches are amazing. I promise. Totally empty white beaches with crystal clear turquoise water, fresh seafood, baklava and local wine, and prices so low they make Thailand look expensive – isn’t southern Europe just wonderful?

Gjipe Beach
Wait. Europe?
It doesn’t really seem possible that an undiscovered beach paradise could be found in Europe these days, much less that it would be so affordable. But that’s exactly what the Albanian Riviera is. Okay, maybe it’s not totally undiscovered, but while there in early June Dan and I had most of the beaches we visited pretty much to ourselves. After falling for the Albanian Riviera last year, I couldn’t wait to return again – this time with a car! After only spending time on Saranda, Ksamil, Himara and Vlora’s main beaches (and Lazarat, but that’s another story…), this time I was determined to explore every nook and cranny of the Riviera and find the best secret beach spots. And that’s exactly what we did!

To properly explore Albania’s best beaches, you’ll definitely need a car. Or at least, you will if you want to see all the best, hidden beaches in Albania! During my first trip to Albania I hitchhiked and took the bus everywhere, but this time I wanted to be able to stop at all the hidden spots I saw from the road, so we rented a car in Tirana for a week. Car rental in Albania isn’t too expensive, but it’s SO worth it. You can see so much more with a car, plus renting a car in Albania meant that we could get to totally deserted beaches instead of sticking to the more popular (and crowded) beach spots like Ksamil and Vlora.

A lot of people have asked me about driving in Albania, and while Dan was actually the one doing the driving, I would say it really isn’t so bad. Most of the roads of little traffic, and for the most part the roads are very wide and nicely paved. And I felt like Albanian drivers were very reasonable – it certainly wasn’t a scary place to be driving. Well, it was fine aside from the time we drove down Albania’s Death Road – but that’s far away from the Albanian beaches, so you probably won’t be headed there. I would recommend renting a car through a global chain as their prices are lower and the companies are reliable.

Saranda (Sarandë) is the main city along the Albanian Riviera, though with around 30,000 inhabitants it’s not exactly huge. While this is probably the main destination for tourists on the Riviera, it’s not actually the best for beaches – but it’s a fine base from which to explore some nearby beaches, as well as Butrint, the ruins of an ancient city nestled in a dense forest. While there are better beach spots along the coast, Saranda is well worth a stop to get a feel for Albania’s beach towns. You can buy cheap seafood and produce (try the cherries!!) at a local market, check out the shops and restaurants along the main beach promenade, and walk up to Lekursi Castle for some unreal views.
Don’t forget to wave smugly at the throngs of tourists across the bay in Corfu, paying three times as much to swim in these same waters. I mean, if you’re the sort of person to do something like that, which of course you aren’t. Me neither.

The Best Saranda Hotels and Hostels

DEMI HOTEL // for those wanting a luxury hotel in Saranda
This four star hotel is right on the beach, and it’s absolutely worth upgrading to a sea view room for a balcony overlooking the water! This is a family-run hotel so it has a lot more character than a big chain, and the staff are super sweet and helpful here. Click here for current rates and availability at Demi Hotel

This B&B is run by a very nice family and I love that it’s within easy walking distance of the city center while still being tucked away from the noise downtown (it’s about a 10 minute walk uphill from the center). They also have parking spaces available here, so you won’t need to stress over finding a spot on the street.

DOLPHIN HOSTEL // for those traveling to Saranda on a budget

Dan and I stayed at Dolphin Hostel while in Saranda, which I couldn’t recommend more highly! Even when we arrived exhausted from a harrowing drive from Tirana we somehow ended up staying up late into the night talking with the hostel’s manager. Breakfast is included (and amazing!) and on our second night he cooked everyone a delicious meal of fish and fresh clams, which mysteriously only cost us each 1 euro. The best!

A 15-minute car or bus ride away from Saranda, Ksamil is where everyone goes to see the nicest Albanian beaches. These are some of the only truly sandy beaches on the Albanian Riviera (most have smooth white stones). The only downside to Ksamil is that its beaches are fairly small and often privately owned, so you’ll have to pay a couple of dollars for a beach chair or drink/snack to use the beach, and there are more people here. I mean, by Albanian standards, which really just means you’ll see 4 or 5 other people on the beach. Ksamil is perfect if you want a pretty beach without traveling far from the center of things. You could even stay in a lovely apartment right by the beach there.

The Best Hotels and Apartments in Ksamil

HOTEL CASTLE // mid-range to luxury hotel accommodation in Ksamil There actually isn’t really any true luxury hotel accommodation in Ksamil, but Hotel Castle is still quite luxurious, especially with its gorgeous views out over the Albanian Riviera. It’s right by the beach and near town and the design is sort of hilarious Albanian kitsch in a building meant to look like a castle!
VILLA MARKU SOANNA // mid-range apartment accommodation in Ksamil Villa Marku is run by a really lovely family who speak good English, and the apartments are right by the sea and near the town center. The owners will happily give you tips and advice for exploring the area, though you could also just relax near the hotel as it’s close by everything.
KSAMIL APARTMENTS // budget apartment accommodation in Ksamil The Ksamil Apartments are a short walk both to the beach and the town center, but still in a quiet area. The apartments are spacious with balconies and really for the price they are such a good bargain.
Ksamil, Saranda

Okay, this is a spring, not an Albanian beach, but you might want to forget the seaside and just spend your entire Albanian holiday gazing into it. Water in The Blue Eye bubbles up from more than 50 meters deep at a sort of alarming rate. Seriously, where is it all coming from, and how can it be that blue? Is Albania’s tourism board secretly dumping dye into this thing each morning?

The Blue Eye spring is about a 25 minute drive inland from Saranda (on the way to Girokaster) and I’ve heard that it can get crowded in the summer with people swimming, but in early June it was empty – and freezing! And before heading back to Saranda drive farther up into the mountains for some pretty stunning views!

Drive the SH8 from Saranda to Himara

The drive along the seaside from Saranda to Himara is stunning, and full of turn-offs into little abandoned beaches. We simply turned down every small road we passed that looked like it was heading towards the water, and not once were we disappointed.

One of my favorite spots was a teeny tiny strip of beach right after Porto Palermo – the view of the little islands from the road wasn’t terrible either!

One of my favorite spots was a teeny tiny strip of beach right after Porto Palermo – the view of the little islands from the road wasn’t terrible either!
We stayed at Himara Riviera Rooms, where we had a lovely little apartment with a balcony overlooking the sea. The owners were SO lovely and this is really my #1 recommendation for a hotel in Himara. It really is just perfect.

CAMPING KRANEA // budget accommodation in Himara
Our first night we camped at Camping Kranea on a beach in the north of town, and it was so, so lovely to wake up right on the beach. If you’re on a very tight budget this is an excellent option.
RAPOS RESORT HOTEL // luxury hotel in Himara
This is the only real resort in Himara, and it has amazing sea views from its rooms, a swimming pool, and a beach right in front of the hotel. The wonderful thing about a beach holiday in Albania is that a hotel like this isn’t even expensive – if you want to escape to a beach resort I would highly recommend heading here!

The Best Albanian Beaches near Himara

One of my favorite beaches in the area wasn’t actually in Himara, but 10 kilometers north in Jala. Jali Beach wasn’t as empty as other beaches we went to, but I enjoyed sunning myself with the locals and taking in the relaxing atmosphere of the small beachside village.

Dhermi (Dhërmi) was my favorite place we stayed in Albania! Dhermi Beach is the longest I saw in Albania and seems to cater to more upscale tourists. The village itself lies up a hill from the water and has beautiful old stone houses built into the side of a mountain. If you want the best Albanian beach experience, I would definitely recommend heading to Dhermi (in fact I have recommended a beach holiday in Dhermi to so many of my friends!).

GUEST HOUSE FOUR SEASONS // budget to mid-range hotel in Dhermi
We stayed in a double room at Guest House Four Seasons, which had a balcony overlooking the sea and was surprisingly cheap. It felt like being on a luxury holiday, but on a backpacker’s budget.

SARAJET E PASHAIT // mid-range to luxury hotel in Dhermi
I had dinner here one night and it was SO nice. The food was amazing, the restaurant has a view over the water, and it’s really close to a sandy beach. If you want a luxury Albanian beach escape, I’d definitely come here!

The Best Beaches near Dhermi

Dhermi is also just 8 kilometers from what might be Albania’s most beautiful beach: Gjipe Beach.
You’ll have to walk the last couple of kilometers, but I promise it’s worth it! This was definitely my happy place on the Albanian Riviera, and I plan on returning to Gjipe Beach again and again.

Driving from Dhermi to Vlora and Tirana

And, if you’re heading north from Dhermi you’re in for a serious treat – well, unless you’re prone to carsickness. The hairpin curves on the road climbing the mountain towards Vlora are brutal, but they’ll take you to a heavenly view of the coastline. 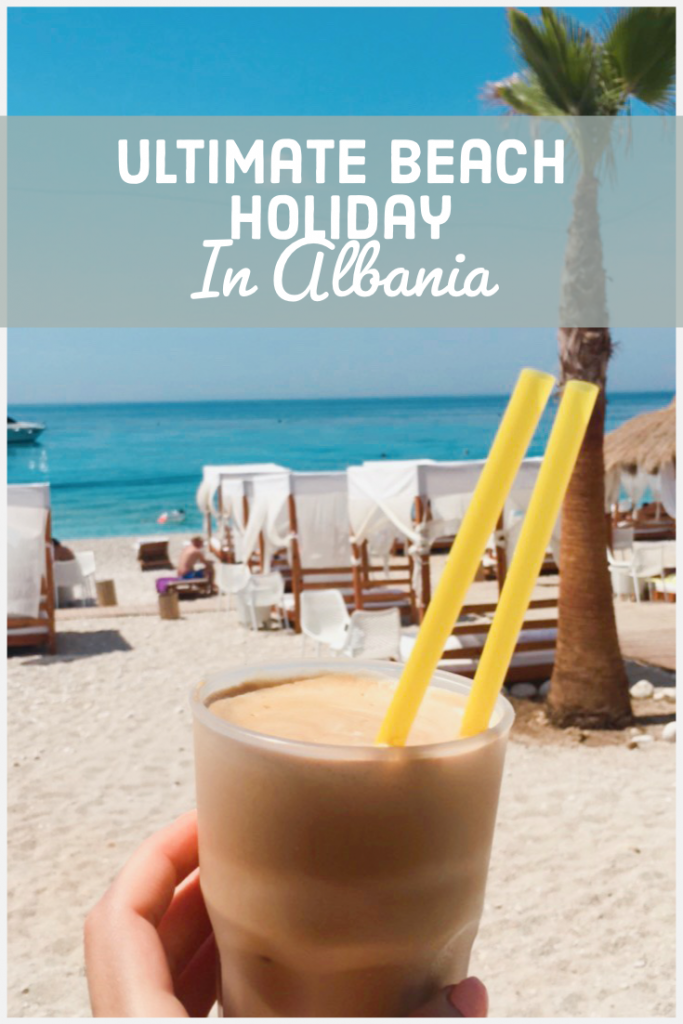 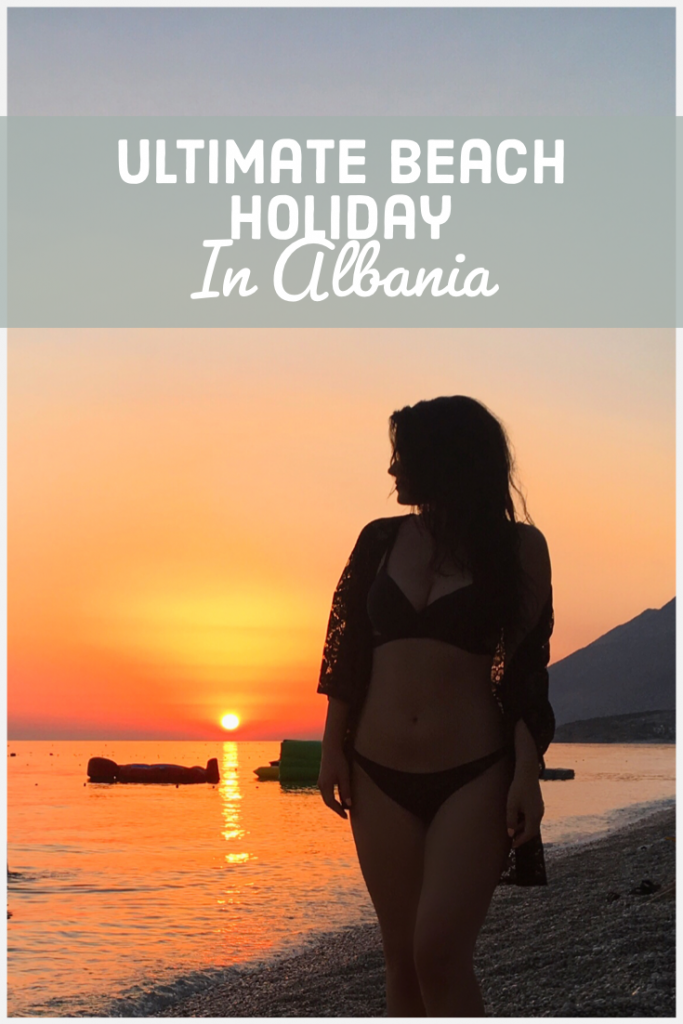